From the world’s most successful email campaign

I am often asked, what was the most successful “of all time”? And I must admit my mind still goes back to Obama’s campaign of 2013 – it was great for its and simplicity. The success lessons still apply. So here is a repost. 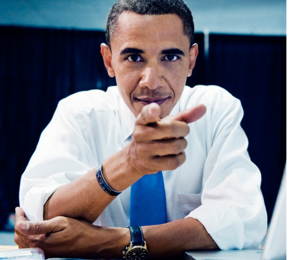 Obama’s email list of approx 40 million subscribers, “his most valuable asset”, has been likened to a nuclear weapon, “the power of which hasn’t been quantified”. The notion that Obama could harness email in order to force legislative action is an entirely new paradigm on the American electoral scene. His ability to make money online meant that he could start his second term debt free from lobbyists.

“It quickly became clear that Obama’s casual tone was most effective”, says Toby Fallsgraff, the campaign’s email director. Obama’s copy spoke to the people. The subject lines that worked best were what you might see in your in-box from friends. ‘Hey’ was the best one in terms of opening clicks; and “I will be outspent” was the most successful subject line financially. Here are the top 5 subject lines in terms of financial success. 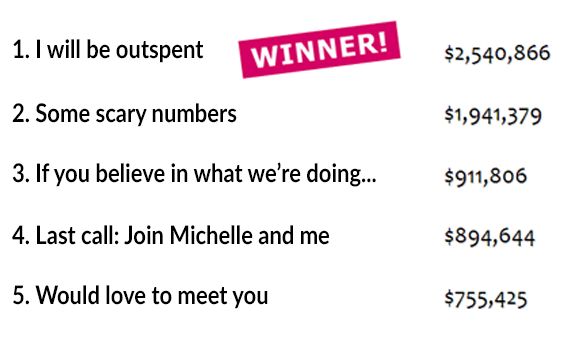 Of course, Obama’s speaking style and ability to create intimacy when he speaks to large audiences means that he can adopt this casual tone. Whilst most marketers are not on such intimate terms with their prospects, we can learn much from the idea that we need to sound “like a real person” and not like a company pitching its products.

Lesson 2: Say ONE thing only.

What I liked best about Obama’s email campaign was the simplicity of structure; one-reason-only for you to engage with this particularly email. Often the messaging was so simple that it could be read at a glance. All emails were focussed on one call to action: Donate. Nothing in any of his emails distracted from this main goal. It brings to mind the old Direct Marketing saying: “Give them a choice and they’ll do nothing.” 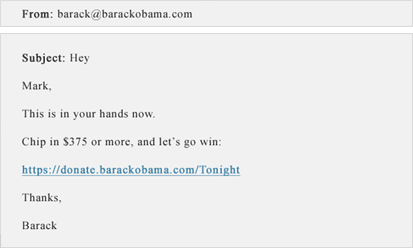 Lesson 3: Extensive use of video.

Both Barack and Michele Obama tapped into the power of video to get their campaign message across.

Note: The new way to use video is to place it at the top of the email (or website) and make it the main component. Short videos less than 2 minutes work best. However, videos should always be used in conjunction with . For viewers in a hurry, is still better. 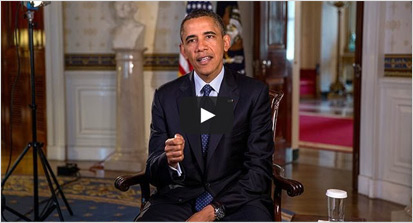 And if you’re not Obama, see a design idea as to how you can make use of this concept for your products here

The bottom line: So did Obama win because he sent out more emails? “According to numbers put out by eDataSource, Obama mailed a staggering 40+MM subscribers compared with Romney’s 4MM, on some days they sent 350MM compared with 26MM from Romney. So while relevance, engagement, creative – ugly or otherwise, Subject Line testing etc. did play some part in his success, they pale into insignificance compared to the impact reach and frequency had in his success.”
[ref Magill report]

Outsource your web and email marketing to us; we apply NeuroMarketing to your sales message to engage your client’s “buying” brain. And in an uncertain and emotional world - the perfect time and space in which to apply neuroscience - you now have the opportunity to make this year, your best year ever.

“Be the best, it’s the only market that’s not crowded.” Tom Peters, business author and speaker